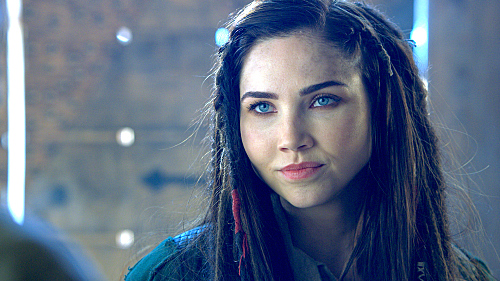 For those who are unfamiliar with the show, please tell us about The Outpost and about Talon.

The Outpost is an adventure/fantasy series, and it follows my character Talon and her journey to the Outpost where she’s looking for the people who wiped out her entire village, and murdered her family. She’s out looking for revenge. There’s fighting, there’s swordplay, there’s action and comedy and drama, magic … There’s a bit of everything for everyone. I think everyone will definitely enjoy it.

What unique quality do you bring to the character?

That’s a hard one. I feel as though Talon definitely lives inside me. I definitely have very similar traits to her in some ways, and very opposite ones in other ones. What’s set me apart from others is I actually have experience in MMA – I’ve been doing it for the last two years. I’m very keen and very hands-on to do all my own stunts, as much as they would let me do. Really sink my teeth into the role.

That was actually one of my other questions, how are you like Talon and how are you most different?

It’s quite funny, because I think she is very different to me, I feel, but also, quite similar in ways. It’s funny, I asked Anand [Janzo on the show] the other day, and he said, “Actually, you are quite like her.” In some ways, not the coldness and the bluntness, I don’t have that in me, but I guess you could say some of the powerfulness that you get to see throughout the season as it goes on. She’s a little bit mischievous, but she has a heart of gold and she looks out for the people who look out for her. The people that she cares about, she’d never let anything bad happen to them. I guess there are some similarities between the two of us.

Do you have any funny behind-the-scenes stories to share?

All of us get  along like a house on fire. We all became like a little family. The ongoing joke for the show was Anand. It is so funny – when you meet him, he’s this very cool, chic, city vibe kind of guy … and he’s playing Janzo. I think it rubbed off on him too much because he became so clumsy and there was this ongoing thing that he could hit his head on anything. We had so many instances while filming where he would swing a sack over his head that was full of rocks and he would swing it over and smack his head. Or he would smack his head on a pole … he was so clumsy. We kept calling him Janzo, “You’re being Janzo like!” That was the ongoing joke, it was hilarious. He would be like, “No, I’m actually not this clumsy, I think it’s literally being him.” So that was quite funny.

What has been your most emotionally and/or physically difficult scene?

The most difficult scene I want to say is the night shoot we did. It was minus 10 and I’ve never been in that kind of temperature before. I’m from the Gold Coast – the coldest days we get are like 14 degrees, which is nothing. It was so cold during those night scenes – my mouth kind of clamped up and I couldn’t talk properly, I couldn’t pronounce my words properly. Everything just started going numb; my feet were numb, my hands wouldn’t work properly … I couldn’t text on my phone. It was really strange, I’ve never experienced anything like this before. I had to put my face in the heater to get my mouth moving again.

I live up in Northern British Columbia; the coldest we usually get in the winter is between minus 25 and minus 30 Celsius (-13 to -22 F).

I don’t know how people survive. I guess you dress appropriate for it, but because I was in costume… I think I had five layers of thermals on, and I was still freezing.

Talon has been “shipped” with many of the characters of the show. Who would you like to see her end up with?

I get this question quite a lot and it’s so hard because I love the chemistry and everything she has with Garret but I also love the idea of her giving Janzo a chance, because he’s such a little sweetheart. I would say I don’t know, I can’t choose because I think they’re both so cute, and so special in their own little way. This is the first time I’ve actually heard the term “shipped.” I’ve never heard that before. 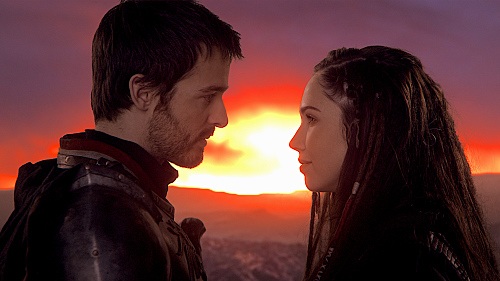 But you know what it means, right?

Oh, I do now. I had no idea when I first heard it on Twitter … people are like “I ship Talon and Garett hard” … all this stuff. I was like what does it mean, what are they talking about, “shipper” or “I ship them so bad.” I had no idea … It wasn’t until Jake explained it to me that it meant relationship.

Albeit new, The Outpost has quite a dedicated group of fans. Why do you think that is?

I feel that the fantasy/sci-fi group of fans … I think they are true fans. I had no idea until I went to ComicCon about how full-on and how they submerge themselves in a show, they live and breathe it. It’s crazy. We’d only shown two episodes and we had a signing down there … I thought no one was going to come because they don’t know that much about it. I don’t know if I saw a show once if I would go up and get a signature from people -- but we had a line out the door. Never in a million years did I expect people to line up and get signatures and photos. It was just crazy. Seeing ComicCon and seeing the dedication that fans have … it’s definitely like a whole new world that I didn’t expect. They’re the best kind of fans to have, they’re very loyal and very protective of the show.

The scene with the rose petals. That was hilarious.

We had so much fun filming that. I was like a shrivelled prune by the time I got out of that bath. I was sitting in that bath for like four hours.

I was going to ask you – I do hope they kept it warm for you?

They did, actually … they kept pouring boiling hot water into the bath to kind of keep it warm and keep it going. One of the props people actually poured it onto my foot because I was trying to separate the flowers, so the flowers wouldn’t get the hot water on them. They accidentally poured the hot water onto my foot so I got a burn on my foot. But it was so fun … honestly, I would so much rather that than being cold.

None that I can share at the moment. There’s a few things in the pipeline that my manager is negotiating at the moment, but it’s definitely exciting times ahead. 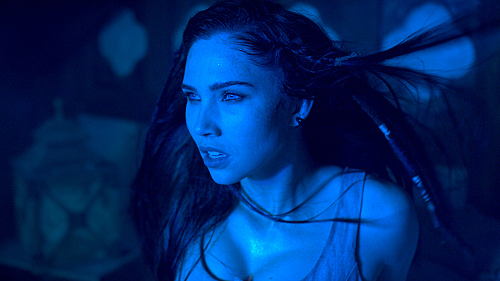 Changing Channels has an Etsy store! Check out our Outpost merch, in addition to Supernatural, Lucifer, and much more!